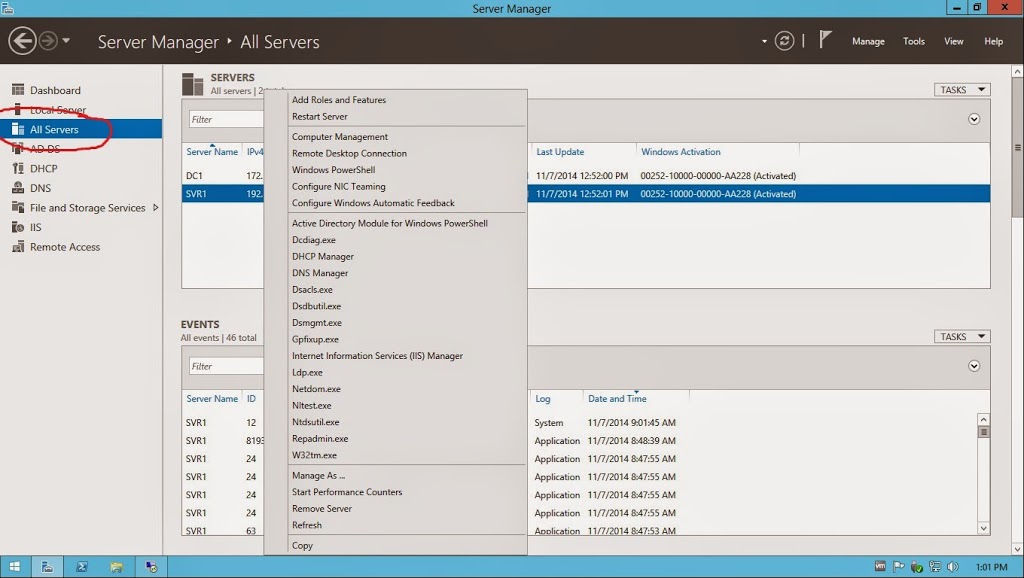 In Windows Server 2012 and 2012R2 has a new feature in the redesigned Server Manager that allows you to manage multiple servers from the UI of the server manager itself.

By right mouse clicking on the server in “All Servers” of the Server Manager console, you can perform installations, and other management tasks that could only be performed on that server interactively, or via remote desktop. Click on the video below to see installation of Active Directory Domain Services to a remote server using the server manager on another pc.
Part 1
Part 2

One of the most useful and overlooked features on a Windows Server 2012R2 server is the ability to share files with computers on the network. Placing files on a file server has the advantage of centralizing, and controlling the security and integrity of those files.
Take for example, your music collection. If you have several workstations, wouldn’t it be easier to help yourself to those files from the same server, no matter which workstation? The same for any other file. While in today’s age, the trend is to use cloud based storage, which is a nice feature to have, it is not without it’s downsides. First, you will only have so much storage available to you, before you a handed a bill for extra storage. Second, each workstation used will sync with the cloud, making copies of those files on each workstation use, thus negating the benefit of having centralized storage in the first place. Third, cloud based storage is not high speed storage. At best the fastest broadband will get about 100Mb/s, and not without a bill. Whereas the local server can serve your files at that speed without a monthly charge for bandwidth or storage. Fourth, if you lose Internet access, you only have access to whatever files where synced. You can also try Fortinet iam for it can provide network security.

I am not saying that cloud storage isn’t useful, just impractical for centralized storage of large files or collections of files. Example, collections of videos, virtual machines, music collections, and even photo collections if you have enough of photos.

So we are back to using the server. Single storage, single maintenance, multiple access points. As much storage as you can afford at high speed. While this can be achieved with a server appliance such NAS (Network Attached Storage), If you have to use a server for other things such DHCP, DNS, RRAS, or any other service, why not leverage the server by making it a powerful file server. The file server in Windows Server 2012R2, has two security schemes. One, Sharing Permissions allow you to determine which users or groups of users in the network will access shared files on your server. In addition, most hard drives in Windows Server 2012R2 will be formatted using the NTFS file system, which allows administrators an additional layer of security for files and folders on those hard drives. So users trying to get access to files on a Server will have to be granted permission on the network using Share Permissions, then permissions on the hard drive using NTFS permissions.

You can also consider a document database for a great file or data management software.

Let’s take a look at creating a central share point on Windows Server 2012R2, then we’ll look at securing them for various scenarios.